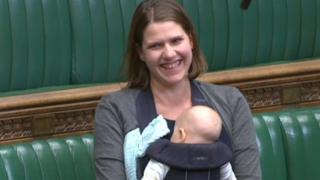 An MP has cradled her baby on the House of Commons benches for what is thought to be the first time during a debate.

Lib Dem deputy leader Jo Swinson appeared in the chamber with Gabriel to listen to the closing remarks of a discussion about proxy voting.

Proxy voting could allow MPs on maternity and paternity leave to nominate a colleague to cast their vote in their absence.

MPs have often been seen in the Commons chamber with their children during votes, but not during active debates. 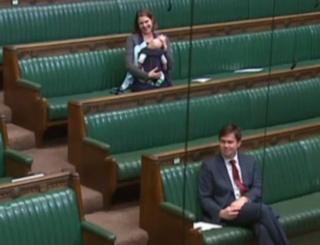 She said: “This House first resolved that members with small babies should be able to vote by proxy seven months ago – since then Gabriel, Elijah and Solomon have been born and two more Commons babies are on the way.

“A cynic might conclude that because all five pregnant and new mum MPs are on the opposition benches the government is trying to kick this issue into the long grass.

“And after what happened to me in July I think I might be able to be forgiven for being cynical about the government’s motivations.”

Opening the debate, Commons Leader Andrea Leadsom said proxy voting would be a “significant change” as it would allow MPs “for possibly for the first time ever” to vote while not being present in parliament.

She said: “Proxy voting will be a profound change to the procedures of this House and so we must get it right to ensure robust voting practice for generations to come.

“If we take this significant step now then, in my view, we will have a fairer, more inclusive parliament for future generations.”

Mrs Leadsom said issues to be considered include whether proxy voting will only be limited to new parents, the types of Commons business it is allowed to be used for, and who should exercise such a vote on behalf of an MP.