Cave paintings change ideas about the origin of art 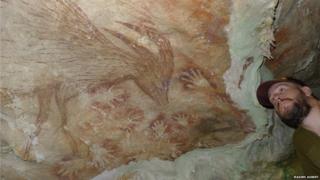 The artworks are in a rural area on the Indonesian Island of Sulawesi.

Until now, paintings this old had been confirmed in caves only in Western Europe.

Researchers tell the journal Nature that the Indonesian discovery transforms ideas about how humans first developed the ability to produce art. 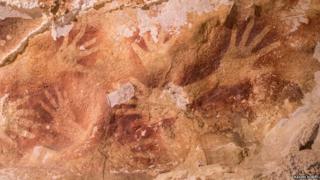 Australian and Indonesian scientists have dated layers of stalactite-like growths that have formed over coloured outlines of human hands. 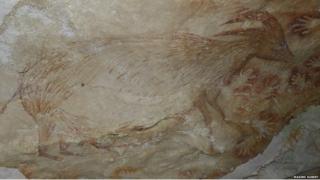 Image copyright Maxime Aubert Image caption This painting, from Bone, is of a variety a wild endemic dwarfed bovid found only in Sulawesi, which the inhabitants probably hunted

There are also human figures, and pictures of wild hoofed animals that are found only on the island. Dr Maxime Aubert, of Griffith University in Queensland, Australia, who dated the paintings found in Maros in Southern Sulawesi, explained that one of them (shown immediately below) was probably the earliest of its type. 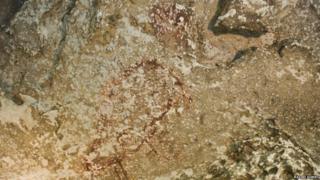 Image copyright Maxime Aubert Image caption At the top of the worn painting is a faint outline of a human hand. Below it is possibly the earliest depiction of an animal

“The minimum age for (the outline of the hand) is 39,900 years old, which makes it the oldest hand stencil in the world,” said Dr Aubert.

This find enables us to get away from this Euro-centric view of a creative explosion that was special to EuropeProf Chris Stringer, Natural History Museum

“Next to it is a pig that has a minimum age of 35,400 years old, and this is one of the oldest figurative depictions in the world, if not the oldest one,” he told BBC News.

There are also paintings in the caves that are around 27,000 years old, which means that the inhabitants were painting for at least 13,000 years.

In addition, there are paintings in a cave in the regency of Bone, 100 km north of Maros. These cannot be dated because the stalactite-like growths used to determine the age of the art do not occur. But the researchers believe that they are probably the same age as the paintings in Maros because they are stylistically identical.

The discovery of the Indonesian cave art is important because it shows the beginnings of human intelligence as we understand it today.

1. Click on links that appear in the video below to explore the story in more depth with Pallab on location in caves in Britain.

2. Return to the main video by clicking on the box/image, bottom right.