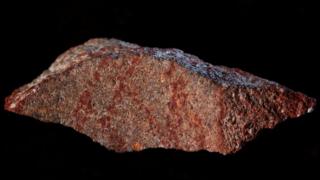 Scientists say they have discovered humanity’s oldest known drawing on a small fragment of rock in South Africa.

The drawing is about 73,000 years old, and shows cross-hatch lines sketched onto stone with red ochre pigment.

Scientists discovered the small fragment of the drawing – which some say looks a bit like a hashtag – in Blombos Cave on the southern coast.

The find is “a prime indicator of modern cognition” in our species, the report says.

While scientists have found older engravings around the world, research published on Wednesday in the journal Nature says the lines on this stone mark the first abstract drawing. 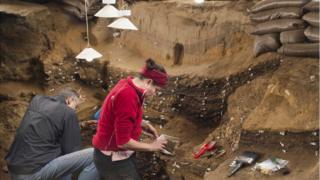 Humanity has used ochre, a clay earth pigment, for at least 285,000 years.

“The abrupt termination of all lines on the fragment edges indicates that the pattern originally extended over a larger surface,” he said.

He told Reuters that while the team would be “hesitant to call it art”, it almost definitely had “some meaning to the maker”.

There have been numerous other artefacts found in Blombos Cave, 300 kilometres (185 miles) east of Cape Town, including beads covered in red ochre, engraved ochre fragments, and a paint-making kit dating back around 100,000 years.

Modern man, known as homo sapiens, is first known to have appeared more than 315,000 years ago in what is now Africa.