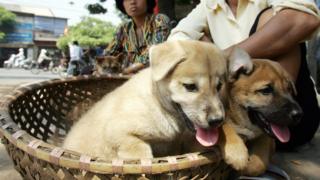 Officials in Vietnam’s capital Hanoi are urging residents to stop eating dog meat as it could hurt the city’s reputation and lead to diseases like rabies.

The Hanoi People’s Committee said the practice could tarnish the city’s image as a “civilised and modern capital”.

The city office added that consuming the meat could lead to the spread of diseases like rabies and leptospirosis.

Over 1,000 stores in Hanoi still sell dog and cat meat.

The committee also urged residents to stop eating cat meat, which is less popular but still available. It highlighted the fact that many of the animals were cruelly killed.

There are an estimated 490,000 dogs and cats in Hanoi – the majority of which are pets.

What is rabies? The controversial Chinese dog meat festival Can you eat dogs in the UK?

A growing number of people in Vietnam disapprove of eating dog meat but it still remains “very much a deep-rooted habit”, according to Linh Nguyen, a journalist with the BBC’s Vietnamese service.

Even on social media, many people welcomed the decision, but there were some who argued it was a habit that many Vietnamese people could not easily give up.

One Facebook user, Dang Ngoc Quang, argued that the dish should not be banned completely, as that amounted to deprivation of freedom.

Instead, he suggested implementing a heavy tax on dog meat or allowing it only to be sold in specific areas.