Gordon Brown in dire warning about the next financial crisis 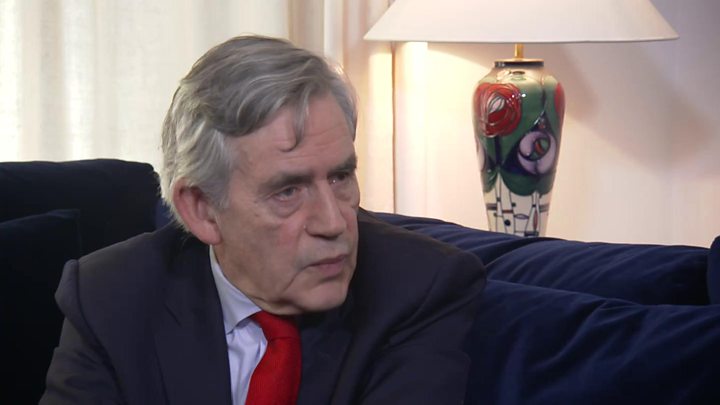 Media captionGordon Brown says we are sleepwalking into another financial crisis

The world is not ready to deal with another financial crisis, former Prime Minister Gordon Brown has told the BBC.

A breakdown in international co-operation means nations would be unable to act in a concerted way to tackle future threats – which are many.

“I feel we’re sleepwalking into the next crisis”, said Mr Brown, speaking on the 10th anniversary of the start of the previous crisis.

He added that some of the bankers involved should have gone to jail.

Mr Brown, speaking from his living room, said: “This is a leaderless world and I think when the next crisis comes, and there will be a future crisis, we’ll find that we neither have the fiscal or monetary room for manoeuvre or the willingness to take that action.

“But perhaps most worrying of all, we will not have the international co-operation necessary to get us out of a worldwide crisis.”

In the immediate aftermath of the collapse of Wall Street banking giant Lehman Brothers, the UK government was one of the first to press the case for using public money to recapitalise failing banks and did exactly that – pumping taxpayer funds into Lloyds, HBOS and RBS.

Mr Brown, UK prime minister as the crisis unfolded, said that it was possible to counteract the evaporation of trust in the markets by co-ordinated action between governments and regulators that trusted eachother.

“But now with the trade wars, the disagreements over climate change, the nuclear deals that have fallen apart there is no spirit of co-operation – there is division and protectionism and I fear a new crisis would see nations trying to shift the blame to each other.”

He acknowledged that the use of public money to bail out high earning bankers was a difficult pill for the public to swallow and although he insists it was necessary, he says that he is frustrated that harsher penalties weren’t dished out to some of the bankers involved.

“I’ll be honest with you. Some of these bankers should have gone to jail and until we have proper laws that can find the guilty and show there are clear penalties, then people will think the bankers have got away with it and will go back to doing the same thing again.”

What blame does he bear himself? Former governor of the Bank of England, Mervyn (Lord) King has been critical of the way his government designed the regulatory regime – moving bank supervision away from the central bank to the Financial Services Authority.

Mr Brown acknowledges that it didn’t work perfectly, but argues that the system was designed to look at isolated outbreaks of bank distress – not a contagion which consumed the entire global financial system.

No national warning system, he says, was equipped to see the full picture and no individual country could have tackled the meltdown.

A global problem needs global co-operation. Without that – and with most of the tools available already used (rock bottom interest rates, trillions pumped into the system through quantitative easing) – Mr Brown paints a grim picture of our ability to face the next crisis.