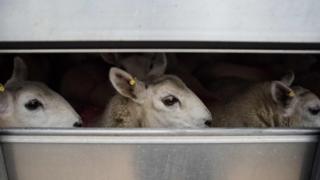 The UK’s lucrative food export industry could be at risk in the event of a no-deal Brexit, a report has warned.

Food consignments and livestock could be delayed at UK borders if more vets aren’t recruited to process them, the National Audit Office has said.

Defra said it has expanded its workforce and is preparing for a range of Brexit scenarios.

But the Committee of Public Accounts chairwoman, Labour’s Meg Hillier, said: “We are rapidly running out of time.”

The Department for Environment, Food and Rural Affairs (Defra) is one of the government departments most affected by Brexit.

But the public spending watchdog has accused it of being unprepared for a no-deal scenario, saying many of its plans were of “poor quality and lack maturity”.

The department has failed to hire enough vets, with the report highlighting that work to “engage publicly with the veterinary market” – due to start in April – had not been authorised by the government by September.

“Without enough vets, consignments of food could be delayed at the border or prevented from leaving the UK,” the report said.

More vets are needed to process the export health certificates – used to prove exports comply with animal health standards and regulations – which will increase if there is a no-deal Brexit.

“Defra will have to introduce a UK equivalent for each of the 1,400 different versions of the current EU certificates, which currently refer to EU law, and agree these with 154 countries in order to continue to export these items,” the report explained.

The NAO said Defra will not reach agreements with all 154 countries by March 2019, when Britain leave the European union.

UK firms exporting to countries where agreements are not reached may not be able to do so for a period after Brexit, the report said.

Meanwhile, the environment secretary, Michael Gove, is due to set out plans to deliver a “Green Brexit”, in which farmers will be paid for “public goods” such as improving access to the countryside, and taking action to reduce flooding.

The Agriculture Bill – to be introduced in Parliament later – could also see payments available for farmers to invest in new technologies and methods that boost productivity.

Subsidies paid out under the Common Agricultural Policy will be phased out over seven years.

The NAO report also raised concerns for the fishing and chemical manufacturing industries.

Amyas Morse, the head of the NAO, said while Defra had “achieved a great deal… gaps remain”.

Defra said it had already started to build new IT systems and developed new services to replace those currently provided by the EU.

The department has hired 1,307 more staff for Brexit-related work.

“Since the report was written, we have continued to reprioritise our resources, expanded our workforce and made further progress on our extensive programme of work focused on preparing for a range of Brexit scenarios,” a Defra spokesperson said.

“Our work will mean that environmental, welfare, and bio-security standards will continue to be met in a way that supports trade and the smooth flow of goods.”