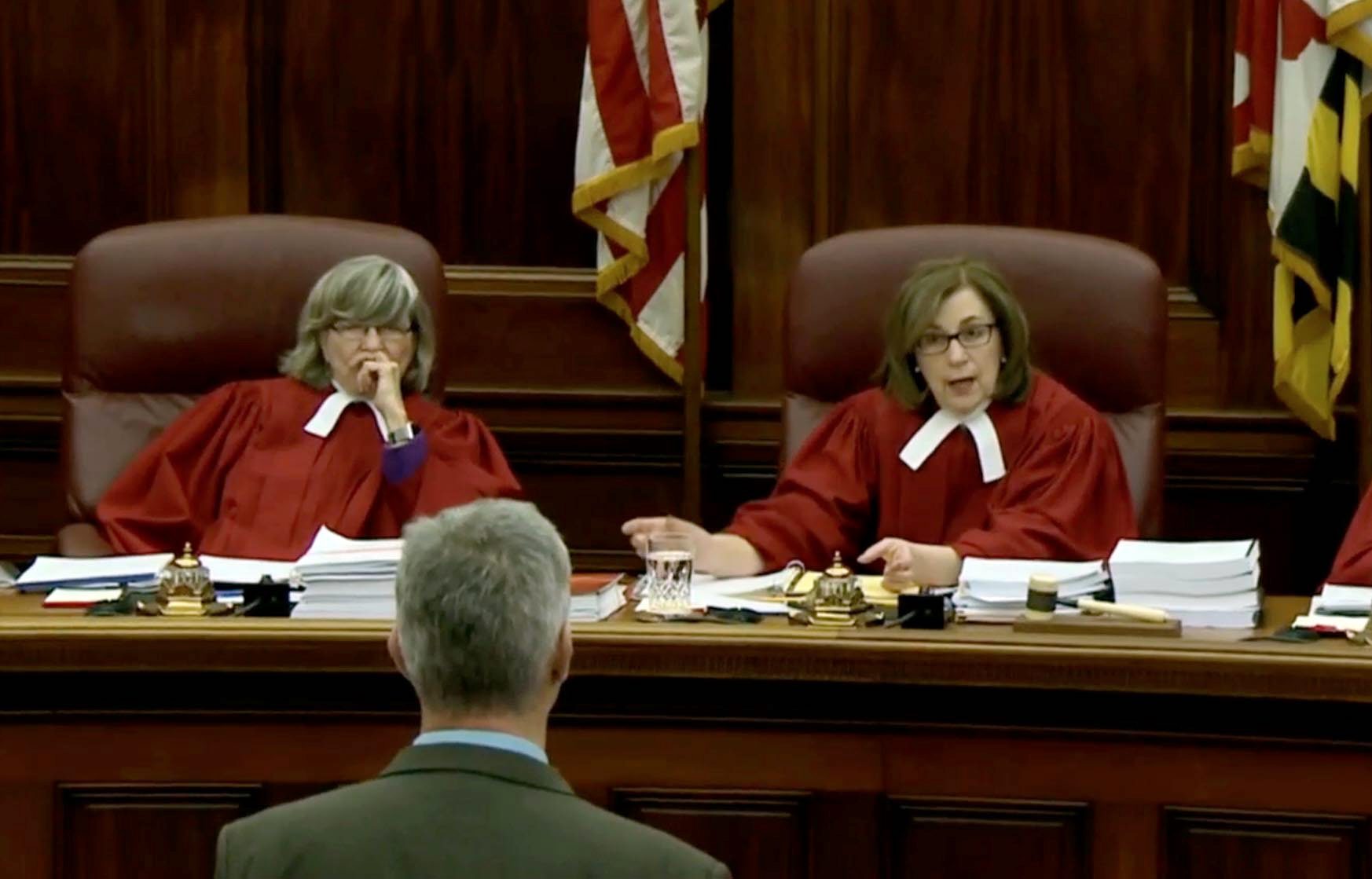 ANNAPOLIS — Maryland Attorney General Brian Frosh’s office offered a new explanation Friday for why the state has refused to pursue a bar complaint against Hillary Clinton’s lawyers over their role in deleting her emails: They changed the rules.

Mr. Frosh’s office said a rules change last year — after the complaint was filed against David E. Kendall, Cheryl Mills and Heather Samuelson — gives them permission to ignore a complaint brought by Ty Clevenger, a crusading lawyer who says he’s being stonewalled because of politics.

The case has taken a number of twists, with bar counsel, charged with reviewing lawyer complaints, initially saying Mr. Clevenger wasn’t aggrieved — though the rules at the time didn’t require that proof. Then at a state circuit court hearing the attorney general’s office called Mr. Clevenger’s complaint “frivolous.”

Now, in oral argument at Maryland’s highest court Friday, state lawyers said a rules change that had been in place before the circuit hearing — but which they forgot about at the time — gives them permission to refuse to investigate any complaints from people who don’t have personal knowledge.

In this case, they said, Mr. Clevenger is getting his information from press reports, which they said is no longer enough to force a probe.

“The reason for denying the complaint here is he had no personal knowledge,” said Michele J. McDonald, who argued the case for Mr. Frosh, a Democrat, and the state bar.

Under questioning by one judge, she specifically said that while the state had advanced the “frivolous” argument before, it was no longer standing by that one.

Mr. Clevenger expressed frustration afterward, saying it’s “a moving target from one hearing to the next.”

“We’ve got three lawyers who are accused of destroying more than 30,000 pieces of evidence that were sought by multiple subpoenas,” he said. “Any average lawyer who had intentionally destroyed one piece of evidence would have been disbarred. Period.”

“Let’s not kid ourselves. This is political,” he said.

Kicking off Friday’s oral argument, the state lawyers tried to get the Court of Appeals, Maryland’s equivalent to a supreme court, to clear the courtroom, kick out reporters and the public and shut down the webcast.

Ms. McDonald said the bar rules are designed to protect the “integrity” of the court process, and Mrs. Clinton’s lawyers deserved privacy from unfair accusations.

The court refused to close the hearing.

“Isn’t this a problem of once the cat’s out of the bag, how do you get it back in?” said Judge Clayton Greene Jr.

Mr. Clevenger says the old rules were clear and the state had to investigate any complaint brought before it. He said that doesn’t mean the state had to bring charges, but it must at least probe the matter.

A circuit court had agreed with him last year, and ordered the investigation into Mr. Kendall, Ms. Mills and Ms. Samuelson.

The Court of Appeals put that on hold in order to take the case.

On Friday, Ms. McDonald argued that the circuit court, which had ordered an investigation, had overstepped its powers and only the Court of Appeals could force a probe.

At this point, Ms. McDonald said, any request would also have to happen under the new rules that took effect last summer — after Mr. Clevenger’s complaint, but before the lower court’s hearing — that allow complaints to be tossed because the complainer doesn’t have knowledge.

“That rule became effective August 1, 2017 and applies to all pending litigation as well as future complaints,” Ms. McDonald told The Washington Times in an email Friday after the hearing. “Under that rule, it is clear that Bar Counsel has discretion to decline a complaint that is not based on personal knowledge but instead is derived from published news reports of third party sources.”

She also dismissed Mr. Clevenger’s complaint that Mr. Kendall and the other lawyers are being treated better than a non-politically connected lawyer would have been. She said a complaint about another lawyer that wasn’t based on personal knowledge “could likewise be declined under this rule.”

The judges did not give a sense for when they might rule.

Mr. Clevenger said after the hearing he is seeking members of Congress who were involved in the investigation into Mrs. Clinton’s emails to come forward and file complaints, which would meet the definition of someone with personal knowledge.

The case is part of the fallout from Mrs. Clinton’s decision as State Department secretary to forgo a department-based account and instead use a secret account tied to a server she kept at her New York home.

When her account became known during the probe into the 2012 Benghazi terrorist attack Mrs. Clinton turned over about half of her more than 60,000 messages from her time as secretary, but deleted 30,000 messages she said were not work-related.

Subsequent investigation by the FBI found out that many of them were in fact work-related.

The FBI investigation said Ms. Mills and Mr. Kendall oversaw the review and deletion process, while Ms. Samuelson did the review and reported to the others. They suggested the emails be deleted in late 2014 — though the actual deletion didn’t happen under late March 2015, or weeks after a subpoena was issued by a House investigation.