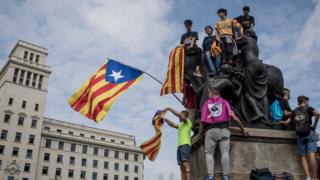 The ongoing stand-off between Catalonia and the Spanish government in Madrid is complicated. Let’s break it down.

Catalonia is a region in north-east Spain. It has its own language, parliament, flag and anthem. It even has its own police force and controls some of its own public services, such as schools and healthcare.

It is one of Spain’s wealthiest and most productive regions and has a distinct history dating back almost 1,000 years.

The Catalan parliament approved an independence referendum which went ahead on 1 October despite being suspended by Spain’s Constitutional Court.

The Spanish government tried to stop voting and hundreds of people were hurt in scuffles with police at polling stations.

While Catalan authorities say just under 90% of voters backed independence, turnout was only 43%.

What have both sides said?

Spain’s Prime Minister Mariano Rajoy has responded by asking the Catalan government to clarify whether or not it has declared actual independence.

Depending on the Catalan government’s answer, the government in Madrid could impose direct rule on the region.

That would mean suspending Catalonia’s powers to make its own decisions on public services such as education and healthcare.

Why does the crisis matter?

There is no suggestion that the crisis could degenerate into an armed conflict but it could damage the region and Spain as a whole economically, bringing new instability to the eurozone.

It could also set an example for other countries with secessionist movements in Europe.

Catalan crisis: Six things you need to know What are the options for Spain now? Does Catalonia want to leave Spain? Could Catalonia make a success of independence? Spain’s distinctive north-eastern region